Sorry for the delay in updating. I got back last Sunday night and had a lot of things to take care of today. Honestly, due to the popularity of the previous comic I could have only done one update this week and the site’s traffic wouldn’t have missed a beat. But I’ve been good lately with updating and I didn’t want to do that. So I created today’s comic.

I’ll be posting a report of the awesome time I had at ConnectiCon so time this week. Until then I hope you enjoy the comic.

If you want to see what inspired me to do this comic and the full text that appears in the background of the comic, both are after the fold.

What inspired me to do this comic today was someone dressed as Zombie Aerith at ConnectiCon. Wish I could give you her name, don’t have it, but at least I have a picture of her to put up here. 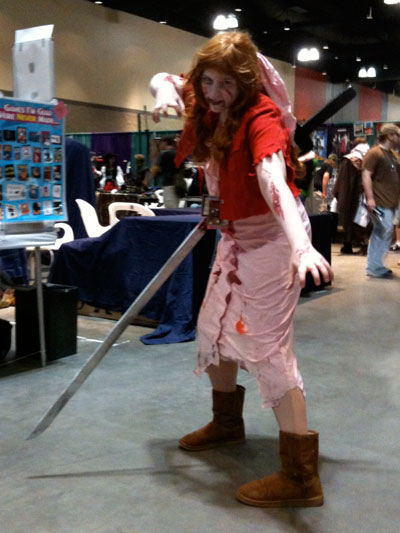 Here’s the full text from the background of the comic:

I was thinking that we would get married on a Tuesday afternoon in the fall when the leaves are just about to fall off the trees. I would wear all white of course and you would wear a nice off-white tuxedo. You wear way too much black and it makes you look like Captain Forehead. Tee hee hee. I would make your large-chested but obviously dimwitted friend Tifa my maid of honor. And you would let that nice man Barret be your best man. Also think we should let that Yuffie girl be our flower girl. I don’t think she has a lot of friends and maybe being included in this would let her feel more successful than the failure she really is. Then after we get married we would settle down in a nice two story house with one of those wrap around porches. All our friends would be welcome to visit except your large-chested but obviously dimwitted friend Tifa who I think is nothing more than a two-bit skank. Oh sure, I have no problem having her as my maid of honor. But I see the way she looks at you and how you don’t say anything around her. In fact I really don’t recall you saying anything around anyone. That’s your problem Cloud. You just don’t say what’s on your mind. You know, maybe if you actually said something intelligent once in a while you wouldn’t be living in Zack’s shadow. Now Zack, there was a real man. He actually did what he said he was going to do. He wasn’t some mute emo goth kid who just did what everyone else expected him to do. Now I’m not saying that you’re that mute emo goth kid. No, I was referring to someone else that I can’t think of at the present time. Don’t worry honey. As soon as we’re married I will start fixing all the things that are obviously wrong with you. Especially your hair. I mean, seriously who are you trying to impress with that monstrosity? The only benefit I can see from it is that your face would be protected on all sides from killer balloons. But how often do you see those? I mean, real balloons of course and not those exploding things that we call balloons. Do we call them balloons in this world? You know, there’s just so many of these damn stories in the series I find it hard to remember one for the other. This one uses a junction system, this one uses a job class, this one has a bunch of ditzy whores running around changing their clothes all the time and engaging in slumber-party-like activities. I wish that was my world but if it was, my boyfriend would have to be a dream from the past instead of some emo goth kid. Not saying that you’re an emo goth kid, because clearly you’re not. I mean look at you. Your hair is blonde. Emo and blonde just don’t mix. Now maybe you could be one of those Twilight wannabes. But then who would you choose? Team Edward or Team Jacob? Oh, who am I kidding? Clearly your pale moping self would be on Team Edward. Unless he kicked you off for making everything just too damn depressing. All this talking has got me wondering about something. Do you like cats? Not that it matters because we’re going to have some cats whether you want them or not. I was thinking we would have a boy and a girl cat. The girl cat would be named Aeris, after me. And we would name the boy cat Cloud. No, wait! Cloud is a stupid name. We’ll name the boy cat Leo. That’s a much better name. Have you ever considered changing your name? I have. It would look much better to have Aerith and Leo on the invitations instead of Aerith and Cloud. Seriously, why not just put Lightning and Cloud on the damn invitation? Now that would look stupid.