But wait, Steve. I’ve seen videos online that show people doing just that. So? I’ve seen videos online that show people microwaving cellphones that turn into demons. I don’t think that’s real and that took a hell of a lot longer to fake make. Give me Adobe Photoshop and Flash and an hour or two and I could make the exact same video. Now, if someone can show me it happening right in front of my face, then I will believe it. Otherwise I have already wasted too much time talking about this silly thing. 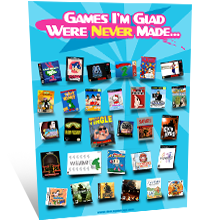 Now speaking about things that are not a waste of time nor silly, the Games I’m Glad Were Never Made… (poster) is available to pre-order on BigBoomBomb.com. This poster includes all twenty four of the current game covers, plus six brand new ones never shown anywhere else before. On top of that, pre-ordering the poster saves you $2 USD over the regular price.

But wait, there’s more! I also have a very special combo pack that includes the new Games I’m Glad Were Never Made… (poster) and the Rejected Mega Man Villains (poster) as well. This combo pack saves you $10 off the regularly combined prices of the two posters. Ten friggin’ dollars!!! Plus, the shipping costs on this combo pack are half the regular price as they would be by ordering both posters individually. It’s a definitely a great deal for readers outside of North America who were hesitant to buy the Rejected Mega Man Villains (poster) because of shipping costs. Now you’re seriously getting your monies worth. Note that the pre-order and the super mega plus rate for the two poster combo pack will only run through June 18th. So order yours today.

As a side note, the Evolution of Tetris (shirt) will be arriving at the warehouse either today or tomorrow on Monday and will be shipping after that. Just in case you were wondering.